More data on the Hardening of Pharaoh's Heart

[minor update 2014] Somebody needed some additional data on this...


I was debating predestination and referred to God hardening Pharaoh's heart in response to Pharaoh first choosing to do that himself. I was prepared to show that from the verses you referenced [in The hardening of Pharaoh's heart] but noticed this: "Pharaoh hardened his own heart without any help from God (Exodus 7.13" The problem is that the verse says this: 13) And he hardened Pharaoh's heart, that he hearkened not unto them; as the LORD had said. I'm not sure how to argue that Pharaoh did it first with that and when it is also preceded by 3) And I will harden Pharaoh's heart, and multiply my signs and my wonders in the land of Egypt. 4) But Pharaoh shall not hearken unto you, that I may lay my hand upon Egypt, and bring forth mine armies, and my people the children of Israel, out of the land of Egypt by great judgments. I could argue that verse 3 is based on God's foreknowledge of what will happen but the response would be that Pharaoh will not hearken in vs. 4 because of what God says he will do in verse 3. Not sure how to proceed. Thanks XYZ


All I was able to do was put together some reference material quotes...

4:2123 These verses summarize the events of the next several chapters, beginning with the request to let the people go so that they could worship God (5:3) and concluding with the final plague, the death of the firstborn (11:46). God was preparing the rescuer for the difficult task ahead (see 11:9). [New Living Translation Study Bible. (2008). (Ex 4:2123). Carol Stream, IL: Tyndale House Publishers, Inc.

"4:20–23﻿. hardening Pharaoh’s heart. This section contains the first reference to the hardening of Pharaoh’s heart—a motif that occurs twenty times over the next ten chapters (during the plagues and up to the crossing of the sea). Several different verbs are used, and Pharaoh sometimes hardens his own heart, while other times it is hardened by the Lord. The concept has parallels to similar Egyptian expressions that convey perseverance, stubbornness, persistence and an unyielding nature. These can be good qualities or bad, depending on what type of behavior or attitude one is persisting in. [Matthews, V. h., Chavalas, M. W., & Walton, J. H. (2000). The IVP Bible background commentary : Old Testament (electronic ed.) (Ex 4:23). Downers Grove, IL: InterVarsity Press.]

But the NARRATIVE statements give the sequence, not the prophetic ones ascribed to God (e.g. 4.21, 7.3) nor the post-event ones ascribed to just Pharaoh by the Philistines (1 Sam 6.6: "Why do you haren your hearts as the Egyptians and Pharaoh did? When he treated them harshly, did they not send the Israelites out so they could go on their way?").

“will stiffen his heart The motif of the stiffening, or hardening, of Pharaoh's heart runs through the entire Exodus story; it appears exactly twenty times. Half of the references are to an essential attribute of the man's character [Ex 7.13, 14, 22; 8.11, 15, 28; 9.7, 34, 35; 13.15] half are attributed to divine causality [4.21; 7.3; 9.12; 10.1, 20, 27; 11:10; 14.4, 8, 17]. In the biblical conception, the psychological faculties    are considered to be concentrated in the heart. Regarded as the seat of the intellectual, moral, and spiritual life of the individual, this organ is the determinant of behavior. The "hardening of the heart" thus expresses a state of arrogant moral degeneracy, unresponsive to reason and incapable of compassion. Pharaoh's personal culpability is beyond question.

"It is to be noted that in the first five plagues Pharaoh's obduracy is self-willed. It is only thereafter that it is attributed to divine causality. This is the biblical way of asserting that the king's intransigence has by then become habitual and irreversible; his character has become his destiny. He is deprived of the possibility of relenting and is irresistibly impelled to his self-wrought doom." [ They translate 7.13 as “Yet Pharaoh’s heart stiffened and he did not heed them, as the Lord has said”]

[I have attached a jpeg of the verse in the interlinear, so you can see that there IS no divine agency mentioned in that verse. It was just a natural ‘grew stubborn’ as an expression of the guy’s response.]


The hardening of Pharaoh is ascribed to God, not only in the passages just quoted, but also in Ex. 9:12; 10:20, 27; 11:10; 14:8; that is to say, ten times in all; and that not merely as foreknown or foretold by Jehovah, but as caused and effected by Him. In the last five passages it is invariably stated that Jehovah hardened (...) Pharaohs heart. But it is also stated just as often, viz., ten times, that Pharaoh hardened his own heart, or made it heavy or firm; e.g., in Ex. 7:13, 22; 8:15; 9:35, ... and Pharaohs heart was (or became) hard; Ex. 7:14, ... Pharaohs heart was heavy; in Ex. 9:7, ...; in Ex. 8:11, 28; 9:34, ... or ...; in Ex. 13:15, ... for Pharaoh made his heart hard. According to this, the hardening of Pharaoh was quite as much his own act as the decree of God. But if, in order to determine the precise relation of the divine to the human causality, we look more carefully at the two classes of expressions, we shall find that not only in connection with the first sign, by which Moses and Aaron were to show their credentials as the messengers of Jehovah, sent with the demand that he would let the people of Israel go (Ex. 7:13, 14), but after the first five penal miracles, the hardening is invariably represented as his own. After every one of these miracles, it is stated that Pharaohs heart was firm, or dull, i.e., insensible to the voice of God, and unaffected by the miracles performed before his eyes, and the judgments of God suspended over him and his kingdom, and he did not listen to them (to Moses and Aaron with their demand), or let the people go (Ex. 7:22; 8:8, 15, 28; 9:7). It is not till after the sixth plague that it is stated that Jehovah made the heart of Pharaoh firm (Ex. 9:12). At the seventh the statement is repeated, that Pharaoh made his heart heavy (Ex. 9:34, 35); but the continued refusal on the part of Pharaoh after the eighth and ninth (Ex. 10:20, 27) and his resolution to follow the Israelites and bring them back again, are attributed to the hardening of his heart by Jehovah (Ex. 14:8, cf. vv. 4 and 17). This hardening of his own heart was manifested first of all in the fact, that he paid not attention to the demand of Jehovah addressed to him through Moses, and would not let Israel go; and that not only at the commencement, so long as the Egyptian magicians imitated the signs performed by Moses and Aaron (though at the very first sign the rods of the magicians, when turned into serpents, were swallowed by Aarons, 7:12, 13), but even when the magicians themselves acknowledged, This is the finger of God (Ex. 8:19). It was also continued after the fourth and fifth plagues, when a distinction was made between the Egyptians and the Israelites, and the latter were exempted from the plagues,a fact of which the king took care to convince himself (Ex. 9:7). And it was exhibited still further in his breaking his promise, that he would let Israel go if Moses and Aaron would obtain from Jehovah the removal of the plague, and in the fact, that even after he had been obliged to confess, I have sinned, Jehovah is the righteous one, I and my people are unrighteous (Ex. 9:27), he sinned again, as soon as breathing-time was given him, and would not let the people go (Ex. 9:34, 35). Thus Pharaoh would not bend his self-will to the will of God, even after he had discerned the finger of God and the omnipotence of Jehovah in the plagues suspended over him and his nation; he would not withdraw his haughty refusal, notwithstanding the fact that he was obliged to acknowledge that it was sin against Jehovah. Looked at from this side, the hardening was a fruit of sin, a consequence of that self-will, high-mindedness, and pride which flow from sin, and a continuous and ever increasing abuse of that freedom of the will which is innate in man, and which involves the possibility of obstinate resistance to the word and chastisement of God even until death. As the freedom of the will has its fixed limits in the unconditional dependence of the creature upon the Creator, so the sinner may resist the will of God as long as he lives. But such resistance plunges him into destruction, and is followed inevitably by death and damnation. God never allows any man to scoff at Him. Whoever will not suffer himself to be led, by the kindness and earnestness of the divine admonitions, to repentance and humble submission to the will of God, must inevitably perish, and by his destruction subserve the glory of God, and the manifestation of the holiness, righteousness, and omnipotence of Jehovah. [Keil, C. F., & Delitzsch, F. (1996). Commentary on the Old Testament (Vol. 1, pp. 294295). Peabody, MA: Hendrickson.]

Not all of the Hebrew fonts will likely transfer in that quote above, so I have snapshotted them and attached them as a jpeg below; I hope this helps, friend…glenn 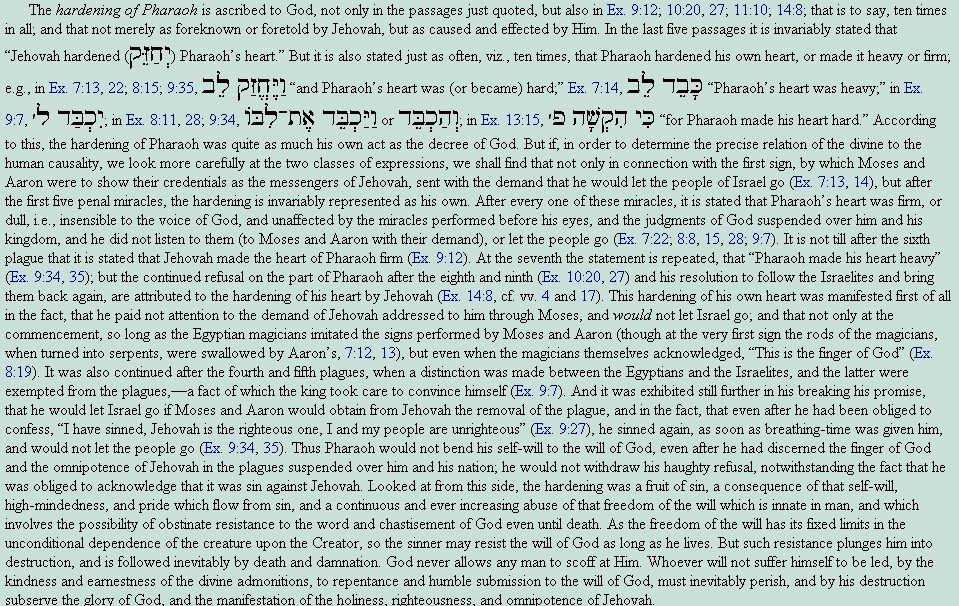